The Martin Ennals Foundation has selected Huda Al-Sarari, Yemeni lawyer and human rights defender, as the laureate of the 2020 Martin Ennals Award. 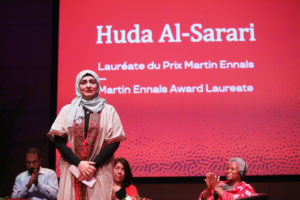 The 2020 Martin Ennals Award ceremony, co-hosted by the Martin Ennals Foundation and the City of Geneva, was held on Wednesday 19 February. A first in the history of the Award: all three finalists are women.

Huda was among three human rights defenders selected as finalists for the Award by a jury of ten world-leading human rights organisations, along with Sizani Ngubane, South Africa, and Norma Librada Ledezma, Mexico.

“Women human rights defenders (WHRDs) are subject to the same risks as every human rights defender, but as women, they also face certain forms of violence and violations due to their gender. WHRDs are often stigmatised and ostracised by community leaders, faith-based groups and even family members”, says the Mayor of the City of Geneva, Sandrine Salerno.

“The Martin Ennals Foundation is particularly proud to honour and support three resilient women human rights defenders this year, our laureate Huda Al-Sarari, as well as our two finalists Sizani Ngubane and Norma Librada Ledezma for their achievements. We hope that the award will shed a light on their achievements, and strengthen protection mechanisms around them”, explains Philippe Currat, President of the Board of the Martin Ennals Foundation.

Huda Al-Sarari is a Yemeni lawyer and human rights defender who graduated in Sharia and Law from Aden University. Since 2015, Huda investigated, exposed and challenged the enforced disappearances that occurred as a result of secret prisons run by foreign governments in Southern Yemen where thousands of men and boys have suffered from arbitrary detention, torture and extrajudicial killings. She collected evidence on more than 250 cases of the abuse taking place within those prisons and succeeded in convincing international organisations such as Amnesty International and Human Rights Watch to take up the cause.

“Being a human rights defender in Yemen is extremely challenging, and being a woman makes this even more difficult. In a male-dominated society, I have to prove myself maybe ten times more than a man”, explains Huda.

Despite the threats, defamation campaigns and sacrifices she and her family endured, Huda continues to stand alongside the families of those who have disappeared.

“Receiving the 2020 Martin Ennals Award for human rights defenders means the world to me. It gives me great strength and emboldens me to continue this fight for justice”, she says. “I believe the Award will be incredibly important in drawing attention to the continual plight of victims of arbitrary detention, abuse and torture in Yemen”, she concludes.

Hans Thoolen, Chair of the Martin Ennals Award Jury, says: “We commend Huda for the work that she conducted, not only against the backdrop of the ongoing Yemeni civil war, but also, in a country where women still struggle to express their political and civil rights. Huda’s legacy is crucial as her thorough investigations and search for accountability will serve to bring justice for human rights violations occurred during the conflict.” 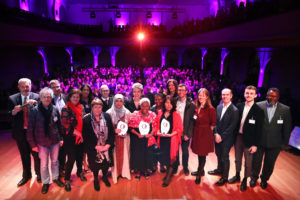 The two finalists of the Martin Ennals Award this year are Sizani Ngubane (South Africa) and Norma Librada Ledezma (Mexico). Sizani is a human rights defender who advocates for land rights for women in rural areas of South Africa. She also supports women to access education and fights for the end of the traditional practice of Ukuthwala, which is the abduction and forced marriage of young girls and women. Norma is the founder of Justicia para Nuestras Hijas. She has supported over 200 investigations into cases of feminicide, enforced disappearance and human trafficking in Chihuahua, Mexico. Both were praised by the Martin Ennals Jury member organisations for their commitment and tremendous achievements in their respective countries.

The Martin Ennals Award for Human Rights Defenders is a unique collaboration among ten of the world’s leading human rights organisations to give protection to human rights defenders worldwide: