It isn’t a coincidence that this far away country Turkmenistan appears like a mystery to many. With media controlled by the state, information hardly ever leaves the country. If it wasn’t for the tireless commitment of our guest editor, silence would prevail. On the occasion of World Press Freedom Day 2021, The Martin Ennals Foundation and the Festival FIFDH Geneva are giving the floor to one of the only independent voices from Turkmenistan: Soltan Achilova, 2021 Martin Ennals Finalist 2021 and to whom the FIFDH 2021 dedicated its 19th edition. With courage and determination, she dares to report from a country with no freedom of expression, drawing a bleak portrait of the Turkmen media landscape.

By Soltan Achilova, Aşgabat, 3 May 2021 – Media are having a hard time in Turkmenistan, where people are simply no longer reading the news. This comes out of fatigue for state-propaganda and junk-news. But how can we even talk about “news” and “reporting” – the pillars of journalism – in a country where rigid censorship and control of the media prevails? 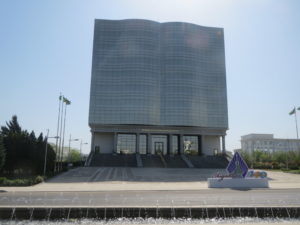 Apart from a handful of advertising papers with a small circulation, independent media are non-existent in Turkmenistan. The information monopoly lies with state-run media, which publish monotonous and boring propaganda.

A few years ago, a huge publishing house was built in Ashgabat, as part of the state’s ambition to rejuvenate the city. However, this facelift of the Turkmen media landscape did not change its substance: newspapers and magazines remain of poor quality and attract only few readers. Some of the official magazines cover national topics, while others focus on professional sectors, with dedicated newspapers for educators, healthcare practitioners, military personnel, or entrepreneurs.

By law, employees from the public or private sector must subscribe, at their own expense, to at least two magazines, one general and the other specialized. The price of local newspapers varies between 0.5 and 2.50€, comparable to the price of some newspapers in Europe. But while the price of newspapers is more or less aligned with the European media, the salaries are 90% lower, making the cost of “news” very high for Turkmens. 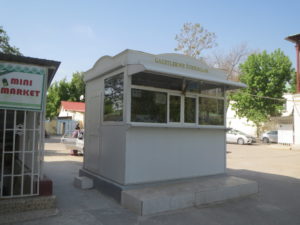 Yet, the subscription obligation is no guarantee for readership. For the Turkmen population, media means more costs, but no news. Demand for print media is so low that in April 2021, last year’s magazines were still being sold at newsstands. It is only by selling bus tickets and office supplies that newsagents make ends meet.

As if that wasn’t enough, receiving newspapers has become almost impossible. The mailboxes, where postmen used to deliver the newspapers, are no longer in use and are often vandalized. The few elderly people still subscribing to newspapers such as “Türkmenistan” and “Neitralny Turkmenistan” (the only edition in Russian), must now rent their mailboxes at a post office for an additional cost, often unaffordable to them. 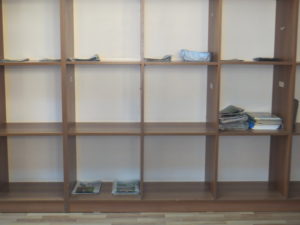 Among the many other shortages affecting Turkmenistan, such as food and cash, is the paper shortage, which hinders the production and distribution of newspapers. While the population is obliged to subscribe to and pay for these state-run publications, they often receive only half of the issues they paid for. Needless to say, they are not reimbursed for the ones not delivered.

Online editions paired with new subscription obligations have proliferated but did not boost readership either: the newspaper’s electronic version is usually a simple low-resolution scan of the hard copy, almost impossible to read on a screen, and only when the Internet connection works every now and then.

No news, no problems 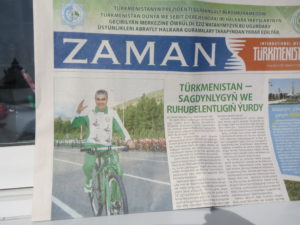 Make no mistake, the content of Turkmen media has nothing in common with real life. Official outlets mostly publish portraits of the President, his speeches or articles extolling him. Reporters are afraid of speaking out and doing their job. Not only do they fear to cover burning “problems”, but it is even forbidden to use the word “problem”.

This also applies to the ongoing global pandemic. In Turkmenistan, the use of the expressions “Coronavirus” and “COVID-19” is currently banned. There is no coverage of the pandemic whatsoever, neither on television nor in the print media. Preventive measures to counter the virus are somehow vaguely implemented but referred to as regular infectious and respiratory diseases rather than Covid itself.

In this article, I have used words that are prohibited in my country. I may face reprisals for doing so, but what is the purpose of being a reporter if it is not to report?

Even more so today on World Press Freedom Day. What a shame that I can only express myself in media outside of my country. I wish one day to be able to exchange ideas more freely with my colleagues at home as well as abroad. I would love to have more opportunities to inform my fellow citizens and the world about the odds and beauties of my country – believe it or not, there are many.

All photos © Soltan Achilova for the Martin Ennals Foundation