Education is the way 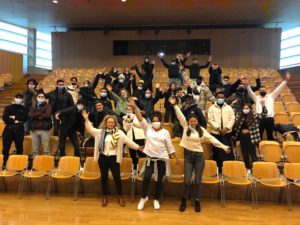 In Geneva, human rights are not only on the agenda of UN experts. They are also promoted by local authorities and debated on school benches. Martin Ennals Director Isabel de Sola tells us more about the Foundation’s education project – a program aimed at familiarizing students with the concept of human rights and the causes promoted by our Defenders.

Not a matter of course

When I was in school in Central America, it was considered too sensitive or even dangerous to talk to young people about the Universal Declaration of Human Rights, forget about migrants’ or LGBTQI rights. Much like in dystopian novels, most education systems worldwide do not believe young persons can be trusted with the precious notion that all of us around the world have the right to dignity, respect, and freedom.

Yet young people are tomorrow’s voters – or peaceful protestors – who will stand up for their human rights and the rights of others when they’re challenged. The human rights movement thus has a vested interest to mentor and motivate the next generation who can apply pressure to political systems, in favor of human rights.

The State of Geneva has understood that well. Students will learn about human rights up to three times during their youth, either in language, history, or social studies classes, or during their economic and business program, or while in technical school.

No progress without human rights education

“Before you became a woman, what was your name as a boy?”, “How did you recover from your experience in jail?”, “Why is driving banned for women in your country?”. These are some of the burning questions posed by Genevan high-school students to human rights defenders during the workshops organized by the Martin Ennals Foundation together with Amnesty International Switzerland and True Heroes Films.

The program – called Defendre les droits humains, ici et ailleurs – raises awareness of how to defend human rights and the tools to campaign. It combines multiple media and games to transmit the stories of human rights defenders and their causes to students. From there, the students work on their own campaigns so as to practice using different communication tools and techniques for defending human rights.

At the end of the program, we bring Martin Ennals Award winners to the schools for an intimate conversation with the students. These moments have been priceless, for students and teachers, but especially so for the Martin Ennals defenders. The students barrage the defenders with their questions and they in turn open up to their audience, sharing with them their motivations, hopes and fears, inviting them to be part of the universal cause which is human rights.

Watching these conversations between hopeful students and battle-worn human rights defenders has made it patent to me that Geneva is a special place where locals are willing to connect on a deeper level with visitors from faraway lands, where life could be radically different.

One pitfall I would like to avoid is to assume that all students are aligned in their thinking about human rights causes. Some of the issues our program addresses are not of universal agreement – for example, the right to asylum, the rights of sexual minorities, or sustainable development versus environmental conservation. Many of the students are shy to express opinions that might go against what they perceive a defender stands for, or which might cause offense. My aim is that over the next editions of our program, we’ll create opportunities for the students to debate their ideas and pose uncomfortable questions. School should be a place, I hope, where we stay open to hearing ideas that differ from our own, in a safe framework.

United in our shared humanity

During a recent encounter at the schools, one of the students asked the defender how they would continue their work, now that they had to be exiled from their home country? The defender shared with the students his belief that there is only one united humanity, and that for him the boundaries around countries, demographics or ages, do not stand in the way of working together. “I’m here today with you”, he told them, “because if you hear about what’s happening in my part of the world, maybe you’ll join me in working for change tomorrow.”

Let’s persist in our efforts so that this will be the case, and that the students who grow into voters and peaceful protestors, will give vital energy to Geneva’s central place as a capital of human rights – but also to causes and movements happening worldwide.