Appeal denied for Pham Doan Trang: Vietnam puts HRDs behind bars while lobbying for a seat at the HRC 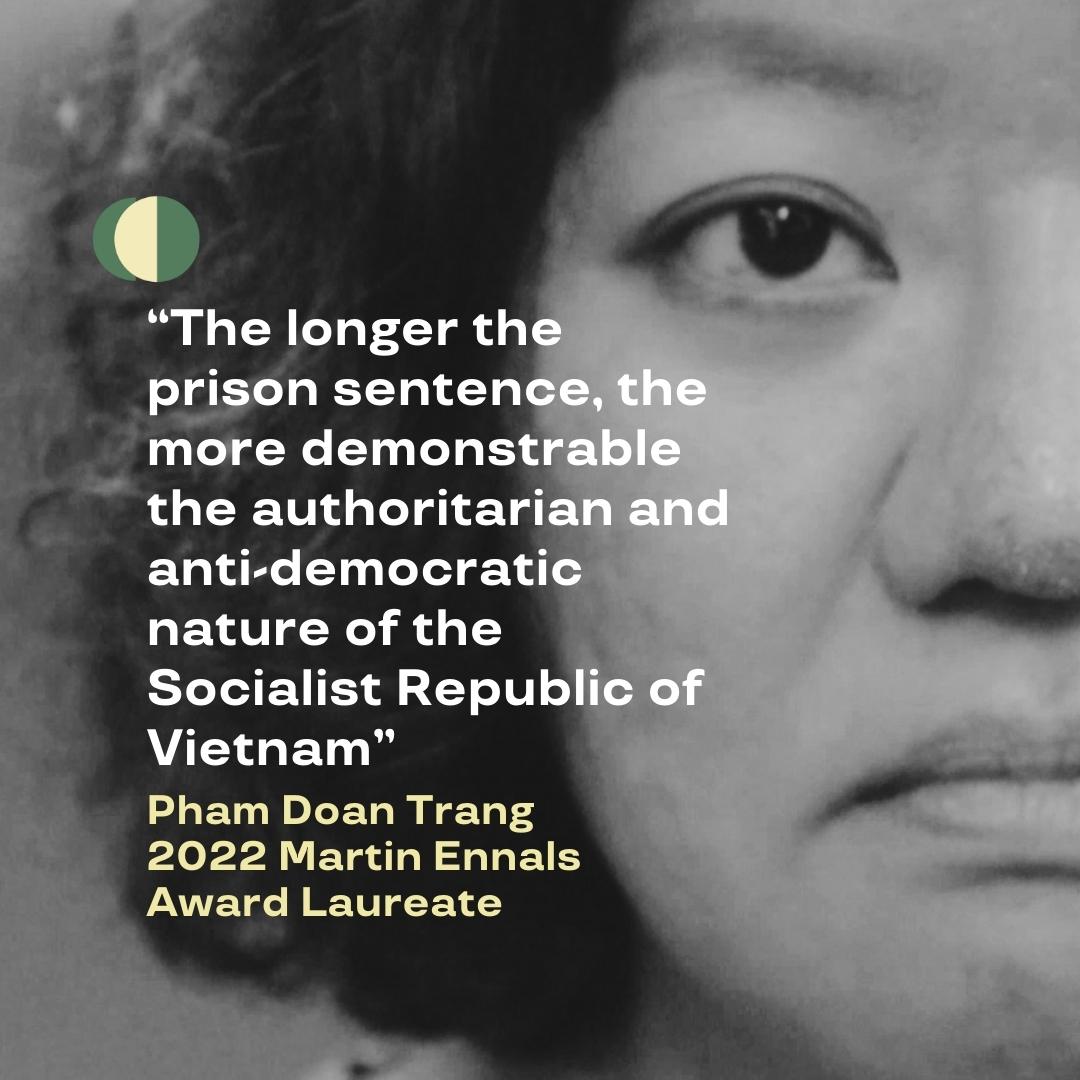 On August 25, a Vietnamese court reaffirmed the sentence of journalist Pham Doan Trang, the 2022 Laureate of the Martin Ennals Award for human rights defenders. Following her trial for “conducting anti-state propaganda” in December 2021, Trang was sentenced to 9 years in prison. The Vietnamese authorities denied access to the courtroom to her family members and diplomats from supporting countries including the United States, Germany and the Czech Republic.

On August 15th, ahead of the appeal hearing, Trang’s lawyer raised concerns about her critical health condition:

“She seemed to have lost more weight since her trial in December 2021 and she suffers from long COVID-19 symptoms.”

The decision of the court evidences the alarming situation for human rights in the country. Journalists and human rights defenders in Vietnam are at great risk of violence, facing censorship, fines and long-term jail sentences for exposing corruption and human rights violations committed by governmental institutions.

In a recent statement, the European Union labelled as “vague” the charges of “anti-state propaganda” that Trang was accused of and underlined that the actions taken against Trang violate Vietnam’s international human rights obligations.

The U.S. Department of State stressed that “Trang’s continued detention is the latest instance in an alarming pattern of arrests and sentencing of individuals in Vietnam for peacefully expressing their opinions” and urged the Vietnamese authorities to grant her access to medical care.

During her trial in December 2021, Trang published a statement expressing that “the longer the prison sentence, the more demonstrable the authoritarian nature of the Socialist Republic of Vietnam”.

In March 2022, Vietnam launched its candidacy for a seat in the United Nations Human Rights Council 2023-2025. The voting will take place in October at the UN General Assembly in New York. However, the results from Pham Doan Trang’s appeal reconfirm that Vietnam does not respect the commitments enshrined in the UN Universal Declaration of Human Rights. Its presence on the Council may erode the veracity of the proceedings and the legitimacy of the Council to oversee the protection of human rights around the world.

Pham Doan Trang is a leading journalist and an advocate for democracy in Vietnam, raising awareness of a broad human rights agenda in the country. She advocates for the guarantee of civil liberties such as freedom of expression, freedom of the press, and freedom of assembly. In 2016, Trang denounced the environmental disaster caused by the conglomerate Formosa operating in central Vietnam and exposed how government agencies acted inconsistently, in contradiction, and how the lack of transparency and accountability impeded the investigation to resolve the crisis.

In recent months, Pham Doan Trang has won several human rights awards, including the 2022 Women of Courage Award from the US State Department, and the 2022 Canada-United Kingdom Media Freedom Award. The United States and many civil society organizations have denounced Trang’s unfair trial.

The Martin Ennals Foundation urge the Vietnamese authorities for her immediate release and joins calls on the Member States to evaluate Vietnam’s bid for membership of the Human Rights Council 2023-2025 against its recent actions.