In a joint statement, the Martin Ennals Foundation and nine other human rights organizations urge the Chinese government to ensure 2021 Martin Ennals Laureate and human rights lawyer Yu Wensheng is able to leave Nanjing Prison and freely reunite with his family in Beijing on Tuesday, March 1, 2022. The signatory organizations also call for sustained attention on the growing risks and threats his wife, Xu Yan, faces for advocating for his rights and release. 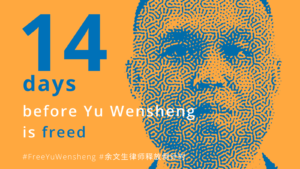 A Laureate of the 2021 Martin Ennals Award, Yu Wensheng is a leading Chinese human rights lawyer. He has been detained since 2018 for his activism in favor of the rule of law, democracy and governmental reform in China. His detention has been declared arbitrary and unlawful by UN experts.

Yu Wensheng is expected to leave prison in Nanjing on 1 March 2022, after being detained for 50 months. The signatory organizations express grave concern that Yu Wensheng may be put under a de facto home arrest, severely restricted in his movements and communication, and unable to reunite with his family in Beijing.

The Martin Ennals Foundation and all signatory organizations urge the Chinese authorities to:

Read the full statement below (click here for the Chinese version):

Chinese human rights lawyer Yu Wensheng is expected to leave Nanjing Prison (Jiangsu Province) on March 1st, 2022, after being detained for 50 months, as he is set to complete an arbitrary sentence of ‘inciting subversion of State power’. Over the past months, his wife Xu Yan has not reported any improvement on Yu’s poor health condition resulting from torture and ill-treatment. This includes a trembling right hand he is unable to write with, chronic hunger, as well as loss of teeth, preventing him from chewing food normally. Authorities reportedly refuse to use funds transferred by Xu Yan to cover a dental operation or to purchase food. Yu is also not allowed to walk outside his cell more than twice per month.

We condemn the reported refusal by Nanjing Prison officials to allow Yu a last visit to his critically ill father on January 9, 2022, and to mourn and see him one last time the day after his death on January 10, 2022. This restriction is neither necessary nor proportionate, and reflects the Chinese authorities’ inhumane treatment of detained human rights defenders.

We express grave concern that Yu Wensheng may not be fully free on March 1st, 2022, and instead put under de facto home arrest, severely restricted in his movements and communication, and unable reunite with his family in Beijing. A number of human rights defenders, including those targeted during the ‘709 crackdown,’ have experienced such restrictions upon completion of their sentences, a practice known as ‘non-release release’. On September 24, 2019, UN experts condemned the harassment and surveillance of lawyer Jiang Tianyong after the completion of his sentence on grounds of a supplementary sentence of ‘deprivation of political rights’, describing this practice as ‘gratuitously punitive and legally unjustified’, Yu Wensheng’s sentence also includes three years of ‘deprivation of political rights’.

We express serious concern at similarly tight surveillance and restrictions targeting Xu Yan. She reported being besieged at home for two days ahead of Human Rights Day (December 10, 2021), as unidentified individuals verbally abused her, pushed her in the stairs, and blocked her apartment’s door. She described a similar situation on September 17, 2021, as she was scheduled to attend an event at the U.S. Embassy. Additionally, she reports being surveilled by at least seven cameras, and by a group of local residents and police officers at a duty station installed in front of her residence.  Xu Yan indicates being under great psychological distress, and expressed alarm at the risk that the recent increase in attacks against her may foreshadow a possible arrest.

Yu Wensheng is a leading figure in China’s community of human rights lawyers.  He notably defended a number of highly sensitive cases, including individuals petitioning the government for redress of rights abuses, civil rights activists, and fellow human rights lawyers such as Wang Quanzhang – detained during the ‘709 crackdown’ in July 2015. His efforts to protect human rights were met with strong retaliation by the authorities, who revoked his legal license on January 16, 2018. Three days later, he was forcibly disappeared under ‘Residential Surveillance at a Designated Location’ (RSDL), a day after publishing an open letter calling for constitutional reform. He was put on trial in secret on May 9, 2019; yet, Xu Yan was only informed of his four-years jail sentence in June 2020. Yu was reportedly put under solitary confinement for over 20 months, and was only allowed to meet with a lawyer of his choice in August 2020.

Human rights lawyers in China continue to face great risks to their physical and mental integrity, and to their rights to exercise their profession, for their promotion of rule of law reform in China. UN experts have expressed ‘dismay at the treatment of human rights defenders and lawyers in China as they continue to be charged, detained, disappeared and tortured,’ and that ‘the mistreatment of human rights defenders in Chinese custody remains endemic and may amount to torture’.

We urge China’s authorities to guarantee in all circumstance that all lawyers in China, including human rights lawyers, are able to carry out their legitimate professional duties without fear of reprisals and free of restrictions.

We call for increased monitoring by UN officials and independent experts, and governments, of the situation of Yu Wensheng and Xu Yan, as well as of human rights defenders and lawyers in China.