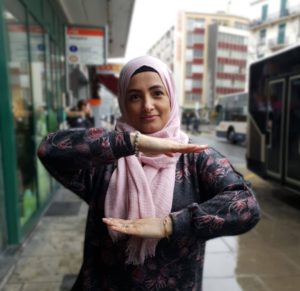 In Yemen, where a civil war has been going on since 2014, Huda Al-Sarari, a Yemeni lawyer, exposed the existence of secret detention centers where Yemeni boys and men were subject to torture, disappeared or even executed. In February 2020, the Martin Ennals Foundation conferred the Martin Ennals Award on Huda for her outstanding defense of these cases and bravery. A few months later, we take stock of her  cause and personal situation.

Huda, what motivated you to become a human rights defender?

In my third year as a student at the University of Aden, I switched from the Faculty of Economics to Law after a voluntary assignment with the Yemeni Women’s Union. During my time with the Union, I worked closely with victims of gender-based violence. I strongly believed that I could empower these women more effectively as a lawyer than as an economist. In addition, I was convinced that as a woman I could understand the suffering of other women due to domestic violence, better than a man would.

In 2015, the war reached us in Aden. After witnessing the many injustices which mothers, wives and sisters faced as security forces arbitrarily detaining their loved ones, my whole life changed. While trying to help them, I discovered that the United Arab Emirates (UAE) was running secret prisons and a network of militias in South Yemen. I spent days and nights secretly documenting and recording everything I saw. Eventually, I created a database with this information. Unfortunately, due to the sensitive security situation, this material could not be used in courts thus far. Given the fear of reprisals from the security services in Aden, it was difficult to engage the local media and human rights bodies in exposing this injustice, so we decided to look outside the country to raise awareness. When we pitched the first story to the Associated Press, it attracted international attention from organizations and media houses. This encouraged us to continue our investigation and pursue other outlets outside Yemen such as Human Rights Watch.

Are you facing specific challenges as a Woman Human Rights Defender in your country?

Being a human rights activist in Yemen is extremely challenging, and being a woman makes it even more difficult. In a male-dominated society, I have to prove myself perhaps ten-times more than a man to be taken seriously. The worst is the defamation and insults that I am subjected to simply because I am a woman. I constantly had to lie to my family and hide some of my activities because of what was being said about me. The easiest way to prevent a woman in Yemen from speaking out publicly is to shame her. This feeling of being shamed and the fear of losing my honor is something I think of day and night.  This defamation campaign is still going on.

Another challenge is to be an activist while taking care of my family. In 2019, my beloved son, Mohsen was murdered. He was only 18 and I felt so helpless to see him die in my arms. Nothing was more difficult to bear than the pain of losing him and the feeling of having exposed my family to danger. Although this has been the toughest period of my life, I have never regretted my choice of becoming a Human Rights Defender. My close connection to the victims and their families gave me the courage to continue my fight and overcome this terrible loss.

You received the Martin Ennals Award 2020. Did this award have an impact for you?

My nomination as the laureate for the 2020 Martin Ennals Award followed the most devastating year of my life with the death of my son. I had doubts about whether I could continue my work after this ordeal. However, the incredible support and recognition I received through this Award has given me the strength to keep fighting until we close all secret prisons in Yemen.

Sadly, there has been a lack of interest in the human rights situation in Yemen and I feel that the Martin Ennals Award has been incredibly important in drawing attention to the continual plight of victims of arbitrary detention, abuse, and torture in the country.

In these unprecedented pandemic times, how is the situation in Yemen?

The situation in Yemen  is extremely complicated and dangerous for all Yemenis. The pandemic reached its peak between June and July 2020 with the number of deaths rising to an alarming level. We became witnesses to mass graves in big cities like Sanaa and Aden. The medical infrastructure was occupied and entirely consumed by the virus. The cost of medical care for the elderly has multiplied because of the limited space available in hospitals. In August, the number of cases began to decrease. However, people are still very much afraid of the possibility of a second wave.

Has the COVID-19 pandemic affected your work?

A few months ago, I had to leave Aden temporarily, but I continued to receive threats even after my departure. My family still lives between Aden and Egypt, and I am deeply concerned for their safety there. I hope that this situation will be only temporary and that I will  return to continue my work.

As a Human Rights Defender, I am used to moving around and meeting new people every day. The pandemic, however, has forced me to stay in one place. I also have asked my colleagues to stop interviewing mothers, wives, sisters and other relatives of the detainees due to health concerns. I bear a  sense of responsibility towards these women, which is why I must help my community in stopping the spread of this virus.

In May, my father passed away, but due to travel restrictions, I didn’t get a chance to say goodbye to him. My family even had difficulties burying him because the cemeteries were completely occupied by COVID-19 victims.

What is your message to Human Rights Defenders in those troubled times?

My message to all Human Rights defenders is to never lose hope and not give in to frustration. I advise you to make the safety of your loved ones a priority because they help you keep going. Conflicts have a way of normalizing abuses; our role is to make sure that this can never be the case. We have to keep learning and be the voice of the most vulnerable in our societies.

And what is your biggest hope for your country?

For me, there is nothing left to lose after suffering the loss of the most precious thing in my life, my son. My greatest hope now is that we can win our fight for justice for the families and victims of arbitrary detention in Yemen. My hope is that Yemen will become a modern civil state that belongs to all Yemenis, and not just a few. We will fight for a state that guarantees the protection of human rights and the dignity of each and every Yemeni.