Committed to a better world 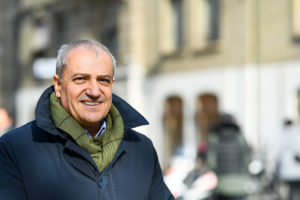 The City of Geneva is unique. Small in size, its reputation is vast. Considered the world capital of human rights, it hosts the most sensitive discussions on the international human rights agenda and courageously supports numerous human rights initiatives. Among these is the Martin Ennals Award, which for more than twenty years has honored human rights defenders from all over the world who are strongly committed to the promotion of fundamental rights, often at the risk of their lives. The City of Geneva has long supported the Award and the work of the three Laureates. Mr. Alfonso Gomez, Administrative Councillor of the City of Geneva, speaks about this long-term commitment.

Geneva is often called the “world capital of human rights”. Does it live up to its reputation?

Geneva plays a leading role in the field of human rights. A city of peace, negotiation and mediation, it is also the host of the main international organizations active in this field, and the headquarters of the Human Rights Council and the Office of the High Commissioner for Human Rights. This role is all the more important as Geneva can also count on a committed, mobilized and organized civil society, which reminds States that they are obliged to respect the texts they have signed. Because diplomacy and multilateralism are not always enough. It is certainly this coexistence between UN bodies, a tradition of good offices and a very strong civil society that makes Geneva the world capital of human rights.

The City of Geneva has been supporting the Martin Ennals Award since 2005. Why this commitment?

Everywhere in the world, those who fight in the name of a certain idea of humanity and for the respect of fundamental rights run the risk of becoming themselves the target of acts of violence. Every year, hundreds and thousands of people are hunted down, criminalized, tortured, imprisoned and even killed because of their commitment to human dignity and the defense of democratic and environmental rights. In most cases, those responsible for these crimes are never prosecuted. In many cases, it is the states themselves that orchestrate the repression. The Martin Ennals Award helps to break the silence, to make these men and women visible, to denounce the intolerable. The City of Geneva has been supporting this award since 2005, in keeping with its deep commitment to fundamental rights. It is part of the municipal will to promote a fairer world, not only at the international level, through its Delegation Geneva City of Solidarity, but also at the local level through the defense of minority rights, communities and ecology.

What makes the Martin Ennals Award so special and why is the City of Geneva committed to it?

The Martin Ennals Award is the result of a unique collaboration between ten of the world’s leading human rights organizations. Together, they form an independent Jury, which has a wealth of expertise and is able to nominate three human rights activists each year. In parallel, the Martin Ennals Award not only honors their struggle, their courage and their perseverance, but also provides them with protection through the media. The City of Geneva is very attached to these different elements, which often lead to the Martin Ennals Award being considered as the “Nobel Prize for Human Rights”.

What does the Prize represent for Geneva? What is its significance?

At a time when the assault on the respect of human rights is unprecedented, when freedom of expression, the right to asylum and the right to work are attacked everywhere and unceasingly, when solidarity is criminalized and the humanitarian situation of refugees and migrants is increasingly worrying, this Prize is an opportunity to make visible essential struggles and intolerable situations. It forces us to question, to raise awareness and to give voice to human rights defenders throughout the world. Finally, far from despair or despondency, the Martin Ennals Award makes each of us feel the need to act, to resist, to commit ourselves, here and now, for a better world.

Do you have a personal experience with human rights to share with our readers?

My origins made me aware of the respect of democratic rights from a very early age. Having had a grandfather incarcerated for his commitment to democracy and the republic in Franco’s Spain, I modestly pursued this path by joining the ICRC for 15 years. I was able to see how important it is for victims to be recognized, supported and helped. I was particularly moved by the looks of gratitude and hope that I saw during prisoner exchanges in the Caucasus, repatriations or exchanges of family messages in Iran or during food distributions in Somalia. Victims are no longer alone, they are no longer anonymous. Giving an award to a human rights defender also means shedding light on the fate of thousands of unknown men and women.

Join us live for the announcement of the 2022 Martin Ennals Award Laureates on Wednesday 19 January at 11am CET here.