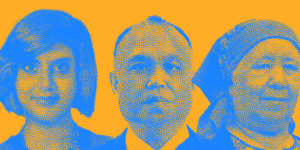 Three outstanding human rights defenders based in authoritarian states are nominated for the 2021 Martin Ennals Award for Human Rights Defenders. In isolated Turkmenistan, Soltan Achilova documents human rights violations and abuses through photojournalism. Imprisoned in Saudi Arabia, Loujain AlHathloul is a leading advocate for gender equality and women’s rights. A lawyer, Yu Wensheng defended human rights cases and activists before his conviction and imprisonment in China. The Finalists distinguish themselves by their bravery and deep commitment to the issues they defend, despite the many attempts to silence them by respective governmental authorities. The 2021 Martin Ennals Award Ceremony will celebrate their courage on 11 February during an online ceremony hosted jointly with the City of Geneva which, as part of its commitment to human rights, has for many years supported the Award.

Nothing can stop us from celebrating human rights defenders

Each year, the Martin Ennals Award honors human rights defenders from around the world who distinguish themselves by their strong commitment to promoting our fundamental rights – often at the risk of their own lives. In 2021, the Jury nominated three individuals in distinctly authoritarian contexts. “Every year thousands of human rights defenders are persecuted, harassed, imprisoned, even killed. The Martin Ennals Foundation is honored to celebrate the 2021 Finalists, who have done so much for others and whose stories of adversity are emblematic of the precarity faced by the human rights movement today”, says Isabel de Sola, Director of the Martin Ennals Foundation.

“Authoritarian states tend to believe that by jailing or censoring human rights defenders, the world will forget about them. During the COVID-pandemic, it seemed like lockdowns would successfully keep people from speaking out. This year’s Finalists are a testament to the fact that nothing could be further from the truth”, says Hans Thoolen, Chair of the Jury.

The 2021 Martin Ennals Award will be given to the three Finalists on 11 February 2021 at an online ceremony co-hosted by the City of Geneva (Switzerland), a longstanding supporter of the Award. “The City of Geneva reaffirms its support to human rights, especially during these times of crisis and upheaval. Human rights are the foundation of our society, not even the pandemic will stop us from celebrating brave persons who have sacrificed so much”, says Member of the executive Alfonso Gomez.