The power of Media: Luon Sovath’s message to the younger generation 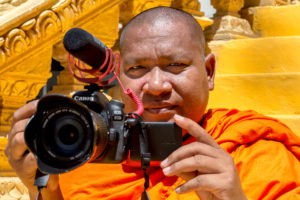 Since the 2018 parliamentary elections, the situation of civil society and human rights defenders in Cambodia has suffered a severe deterioration. Through poems, videos, songs, and via social media platforms, the Venerable Luon Sovath, Martin Ennals Laureate 2012, challenged abusive land grabbing at great personal risk. In retaliation for his commitment to human rights, he became the target of a defamation campaign in May 2020. While his country reels from a new escalation of repression, the Venerable Sovath fled Phenom Peng for Switzerland. The Martin Ennals Foundation met with him to talk about his situation, his fight for democracy, and the hopes he bares for his country.

You escaped Cambodia and recently relocated to Switzerland. What is your daily life like so far away from your country and your community of faith?

The political situation in my country has indeed worsened, which is why, for my safety, I had to travel to Switzerland. I am living in a Buddhist temple in the canton of Bern since July 2020, where I enjoy peace and quietness, even though I continue to help the Cambodian people from afar. I greatly miss my country, my temple, my family, and my friends but I am grateful to be welcomed in Switzerland. This country allows me to express myself freely, without having to worry about my safety any longer.

Are you worried about the future?

Yes, I am worried. Not so much about my personal fate – even though it is currently very uncertain – but above all for the Cambodian people, facing crackdowns on their fundamental rights. Standing up for human rights is not a crime, but it is in the eyes of the ruling party.

You are known as the “Social Media Monk”. How did you come up with the idea of using audio-visual and social media as a mean to promote human rights and to document the abuses in Cambodia?

Only real information will bring justice. If we don’t have evidence on human rights violations, we can’t advocate against them. The people in power in Cambodia will only listen if we bring solid evidence. Otherwise, they’ll accuse us of reporting “fake news”. Back in 2009, I documented human rights abuses with my camera. I uploaded the video to a CD and passed it on to other people to spread the message. With the rise of Facebook in 2013 and the dissemination of smartphones, I started to use social media, by live-streaming events or sharing information directly on Facebook.

Having faced a smear campaign leading to your exile, are you still considering that social media is an ally in the fight for social justice, democracy and human rights?

Access to information is crucial in the fight for human rights. Especially in a country like Cambodia, where there is neither independent press nor free speech, the use of social media is a way of empowering people. The Cambodian authorities have well understood the power of social media and are now using those tools against activists, with harassment or smear campaigns. Why? Because they fear that information could lead to the people questioning power. I still believe that social media is an ally for social justice and democracy, but the battle between information and fake news is unfair since the authorities are investing important resources and tools, which activists can hardly compete with. We, however, keep educating and training each other on how to use social media to document human and land rights violations.

You are a prominent activist, but also a Buddhist monk. How does your faith inspire your battle for human rights?

The Buddha advocated for the respect of life, peace and justice, three pillars of the human rights movement as well, which makes him the very essence of a human and environmental rights defender! It is therefore not surprising that many monks in Cambodia are committed to human rights. I was one of the first monks to stand up for social justice in my country, but I have long since ceased to be the only one. However, it is not without danger for monks to get involved in these issues.  Buddhism is an independent and a-political institution, a symbol of peace and justice in my country. So, when the monks are getting vocal about the regime’s abuses, they represent a serious threat to the Cambodian government, which retaliates with more crackdowns.

You received the Martin Ennals Award in 2012. Has this award made a difference for you?

Yes, it greatly did! The Martin Ennals Award is not only important for human rights defenders in Cambodia, but all over the world. It gave me recognition and protection. While my government tried to bash my work, the Award gave me the confidence to pursue my battle, knowing I was doing the right thing.

Do you have a message to young activists?

Many challenges await the new generation in those troubled times, in Cambodia and other places in the world, but my advice to the younger generation is to keep fighting for human and land rights. They must use whatever tools are at their disposal to advocate for social justice issues and document abuses, be it through their smartphones, social media, or other. Young activists must remain visible and connected. This will make them stronger.

And what is your hope for the future?

According to the Buddha everything in the world changes, always. I therefore believe Cambodia will also change. We must continue to empower the people so they can come forward together in solidarity to demand change and confront the ruling party. In their hearts, Cambodian people have already changed. It should now be the turn of our authorities to embrace this change as well.