In memory of Mama Sizani Ngubane 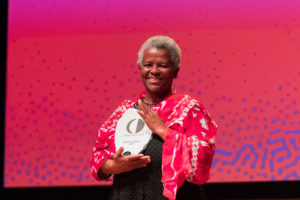 It is with deep sadness that the Martin Ennals Foundation announces the passing of our 2020 Finalist, Mama Sizani Ngubane. We feel honored to have worked with this unique soul over the past year. The Founder of a vibrant movement striving against gender-based violence and for women’s access to land and education in South Africa, she was relentless in her commitment to improving the lives of indigenous South Africans. Martin Ennals Award Laureate 2006 and Board Member Arnold Tsunga dedicates the following tribute to Gogo Sizani.

2020 has been a difficult and painful year. Thousands have perished, succumbing to the novel coronavirus (Covid-19); while others have seen their livelihoods decimated and their families kept apart by lockdowns. Given the scale of the pandemic, many reduced their objectives for 2020 from achieving prosperity to just being alive at the end of the year.

Losing mama Sizani Ngubane to the virus has been a tremendous blow for human rights defenders in Southern Africa who drew enormous inspiration from her commitment and energy to the promotion and defense of human rights.

When the 2020 Martin Ennals Award Ceremony was celebrated last February 2020 in Geneva, Switzerland, an old lady stood out as a Finalist. She had a strong presence and impressed all in attendance with her powerful speech, her warmth, and her humanity.

She was never formally educated as a result of living in the South Africa Apartheid environment where blacks had limited opportunities to advance themselves educationally. The patriarchal nature of the Zulu society further limited the chances of women to finish their studies and take on leadership roles. Witnessing her mother being evicted from her land as a child like many other widowed women, spurred Sizani to protect women and girls from the negative aspects of an otherwise rich Zulu culture.

For her defense of women’s and girl’s rights, she put herself in the line of fire of patriarchy and other powerful elements that preyed on young girls. She faced threats and lived under constant fear of being attacked. She felt misunderstood and to some extent disliked by the traditional leaders who viewed her conduct as an attack on Zulu culture. But Sizani was deeply interested in reinforcing the positive aspects of culture and fighting its negative aspects while agitating for reform so that culture could be a transformative force for its people.

When I met her for the first time in Geneva in February 2020 as a fellow Martin Ennals Award Finalist, Covid-19 had just reared its ugly head in China. We expressed our hope that the dreaded disease would be contained and not be exported to Africa, given the weak public health infrastructure and the potential carnage it could wreak on the continent.

However, our main focus was on how to deal with the threats she received from the powerful – mainly men – who benefit from the cultural practice of ukuthwala (young girls being forced to marry often elderly men). She spoke convincingly on why this negative aspect of culture needed to be modified or abandoned. Little did we both know that what looked like a disease in a far-away part of the globe would spread as quickly as wildfire. It turned out to be the one thing that could actually stop Sizani.

Sizani Ngubane was a strong contributor to the debate on human rights in Southern Africa in general and in our Defender’s WhatsApp group in particular, lamenting how authorities had abused Covid-19 to undermine the enjoyment of rights and implement policies that disproportionately impact the poor and vulnerable.

Sizani had a remarkable way of connecting to the younger generation. Bahumi Mogwe, the youthful daughter of FIDH President Alice Mogwe summarizes her strong bond to mama Sizani Ngubane: “After meeting her last year, I became one of Sizani’s honorary granddaughters. She would always call me “my angel, granddaughter”. The last message I received from her said “Thanks, my Angel, be safe”. RIP Gogo Sizani.”

With Mama Sizani’s passing, we have lost a giant and role model. However, her legacy to fight for equality and non-discrimination for women and girls remains vivid. We will carry on from where she left off.