A trained pharmacist-turned-human rights activist in Burkina Faso, Dr. Daouda Diallo documents human rights violations in a country wrought by violent clashes between government forces, local paramilitary groups and Islamist factions. The organization he helped to build – Collective Against Impunity and Stigmatization (CISC) – dedicatedly advocates for justice and accountability to victims of the violence and their families. His efforts to promote cohesion between different ethnic groups in his country earned him the recognition of Laureate of the 2022 Martin Ennals Award. At a time of renewed political instability following the military takeover on January 24, 2022, his commitment is all the more necessary. 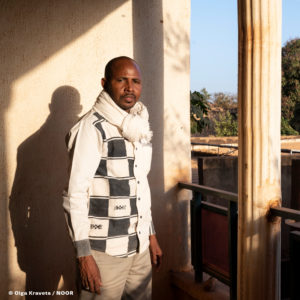 A restless country longing for peace

Located in the Sahel region, Burkina Faso is one of the world’s poorest and most fragile states. The violence between Islamist factions, government forces and local militias has provoked one of the fastest growing humanitarian crises in the world, according to the United Nations. “My country is in crisis, powerless and overwhelmed with more than 1.5 million internally displaced people and 13% of schools currently closed”, Dr. Diallo tells us.

In its World Report 2022, Human Rights Watch notes that “there was a marked deterioration in Burkina Faso’s human rights and security situation due to attacks and atrocities by armed Islamist groups and unlawful killings by state security and pro-government militias.” Human rights violations are almost never investigated and often remain unprosecuted.

To make matters worse, a military-led coup on January 24, 2022 (the eighth since the country’s independence in 1960), plunged the country into greater instability. New military authorities in power are calling for more resources to counter attacks by jihadist groups, while the international community widely condemned the military takeover. The UN High Commissioner for Human Rights, Michelle Bachelet, who recently visited Burkina Faso, said she “deeply deplores” the coup, noting the importance of “preserving the hard-won democratic and human rights gains made in the country.” 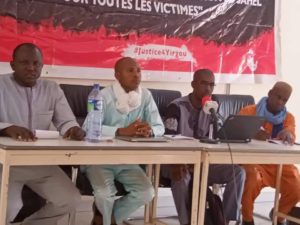 It is in this complex context that Dr. Daouda Diallo, a medical professional, has dedicated the past 20 years to the defense of human rights and the promotion of peace in Burkina Faso. He was head of the Burkinabe section of the international organization Kisal Observatory that promotes human rights in the Sahel before setting out to found CISC. 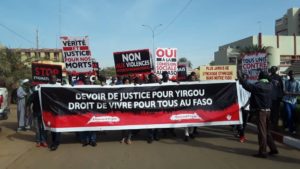 In January 2019, Burkina Faso experienced the largest massacre in the country’s history. It took place during the Burkinabe jihadist insurgency and spanned the north-central region of the country, in 20 different villages within a 50km radius, lasting three days. It began with a jihadist attack on the village of Yirgou, which was followed by retaliatory attacks by Koglweogo “self-defense groups” against the Fulani population. Despite more than 200 people being killed, there was no appropriate intervention by state authorities. “If any case should illustrate the cruelty of this killing, it is this child who was torn from his mother’s back and thrown into a fire. This massacre was the trigger for the founding to the CISC”, Dr. Diallo said. CISC has since documented over 1000 cases of human rights violations, summary and extrajudicial executions, and helped to rescue over 100 victims of enforced disappearance. All this with the hope that one day the victims of the Yirgou massacre may claim justice.

Dr. Diallo’s organization thus directly addresses the social, religious, and ethnic fragmentation in Burkina Faso by calling for social cohesion to prevent further ethnicization and escalation of the conflict. “Daouda Diallo monitors, documents and reports on human rights violations by all sides to the ongoing conflict in Burkina Faso. He is fearless and deeply principled in confronting and calling for government security forces, armed militias and terrorist groups alike to be held accountable for their violations and abuses. He also takes a very humanistic and holistic approach to his human rights work, focusing not just on holding perpetrators accountable, but seeking justice and healing for victims and rights holders,” explains Phil Lynch, Martin Ennals Jury Member and Executive Director at ISHR.

But his great commitment is not without danger. Having received multiple death threats, he is often forced into hiding.

In response to the military coup, Dr. Diallo told us: “Negation of the other has no place in a democratic Burkina Faso. I hope that the new military authorities address Burkina Faso’s deepening social divisions and ensure crucially needed protection for all civilians at risk from conflict, while scrupulously respecting international humanitarian law.”

Despite all, Dr. Diallo remains optimistic. He firmly believes that receiving the Martin Ennals Award will increase the credibility of CISC and ultimately benefit more people: “This award is a recognition and a victory for all human rights defenders in Burkina Faso. It encourages us to continue our work despite the sleepless nights, the threats, and the criticism we have endured. We will stay the course for the future.”