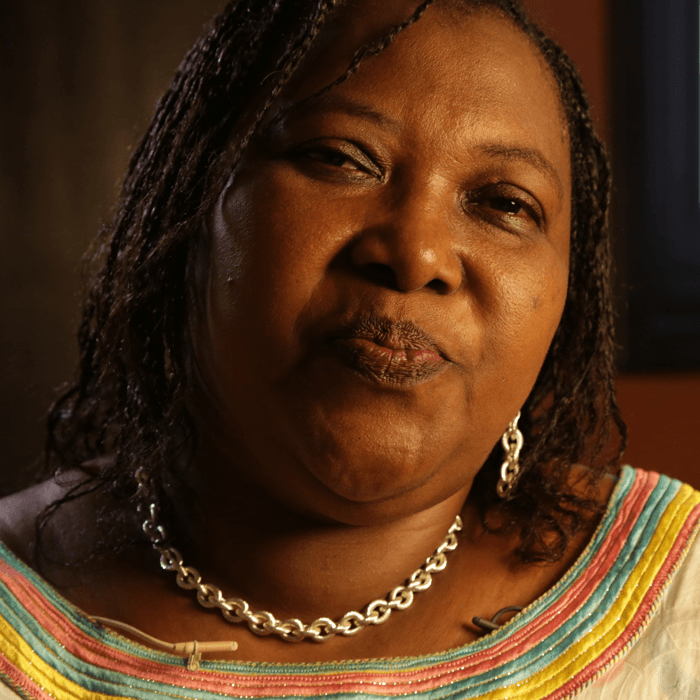 On September 28, 2009, in the sports stadium of Conakry (Guinea), thousands of pro-democracy demonstrators gathered to protest the coup d’état led by Moussa Dadis Camara. Security forces opened fire on the civilians, resulting in more than 150 deaths, and at least 109 women raped or sexually assaulted, according to a UN investigation. 13 years later, a Guinean judge announced the trial of former President Camara and 10 others accused of responsibility for the massacre.

Asmaou Diallo is a leader of the local victims’ support movement, a Finalist of the 2015 Martin Ennals Award, president of the Association of Victims, Relatives and Friends (AVIPA) and human rights advocate. She believes that the involvement of the Minister of Justice in the process to hold this trial it’s of great importance.

“First of all, we saw that the president of the transition, Colonel Mamady Doumbouya, got involved. He went to the Ministry of Justice and declared his desire for the trial to open on September 28, 2022. Then, the Minister of Justice received my team for the first time, and then we met for the second time…. The possibility of the trial seemed more concrete than ever”.

What happened in the Conakry stadium in 2009 was qualified by the United Nations as “crimes against humanity“. The International Criminal Court (ICC) opened a preliminary examination of the situation in Guinea in 2009. The ICC is often used as a court of last resort when national courts are unable or unwilling to prosecute serious crimes. Over the past decade, the ICC Prosecutor’s Office, and an expert from the Office of the UN Special Representative on Sexual Violence in Conflict (SRSG-SVC) in Guinea worked with local authorities and civil society organizations. Asmaou collaborated with the ICC 18 missions in the country and the SRSG-SVC investigations, which contributed to the trial taking place.

The human rights situation in Guinea remains difficult. Since 2021, when Colonel Doumbouya took power, civil liberties were affected. The authorities dissolved the main pro-democracy party and opened fire on protesters during demonstrations.

Asmaou was affected by the loss of her son during the events of 2009. Today, because of her public support and advocacy work for the victims, she fears for her safety and possible reprisals from those involved in the massacre. She stressed that there are many people who do not support the trial, especially soldiers.

“People ask me why I don’t keep silent. I will never be silent. It is absolutely necessary that the truth be known, we hope that from the trial on September 28 the truth will be revealed. We want to put an end to this fight and finally move forward”.

In Guinea, sexual violence is used as an intimidation strategy against women human rights defenders. The military uses it as a weapon to marginalize them from speaking out.

“I am in the midst of those women who suffered those rapes. I know how many times they were traumatized, and I know how much they struggled to overcome all that. Because rape is a taboo in Guinea, it is not easy for victims to talk about it”.

Over the last few years, Asmaou and her team raised women’s voices up to the national stage. Thanks to her commitment and the support of her partners, Asmaou provided the victims with medical and psychological care. Many victims now feel they can speak openly about what happened to them.

“I am proud of these women. They decided to go ahead, fight and break the silence so we could understand. By speaking out about what happened, we educate men and women to be aware of the value of women. It’s not that women have to be careful, it’s that men must behave.”

Although it took 13 years to arrive at the truth, the process and its outcomes are crucial for ensuring Guineans’ rights into the future. The Guinean people expect reparation for all victims with medical and psychological support and, finally, a guarantee of non-repetition. This is what they would initially consider justice.

During her years of activism, Asmaou tells us optimism is one of her biggest lessons learned:

“We must be optimistic. Optimism gives us the strength to remain committed. When I see the victims and the situations in which they find themselves when I receive threats for my activism and after losing my son, whom I will not get back: I tell myself that we must commit ourselves to those who are still alive, to protect them. I take my courage, my commitment and above all my optimism to ask for help to achieve my goal: the end of impunity.

The Martin Ennals Award remains engraved in my memory. It is an honour, a mark of public and international recognition for my work, my struggle, and my commitment to the victims of September 28, 2009. The Award gave me the necessary protection and encouraged me to continue this fight”.

The Martin Ennals Foundation echoes the calls made by Asmaou Diallo to promote women’s rights and justice for the victims of the 2009 massacre. We urge the Guinean authorities to protect and empower women human rights defenders in their unwavering search for accountability.